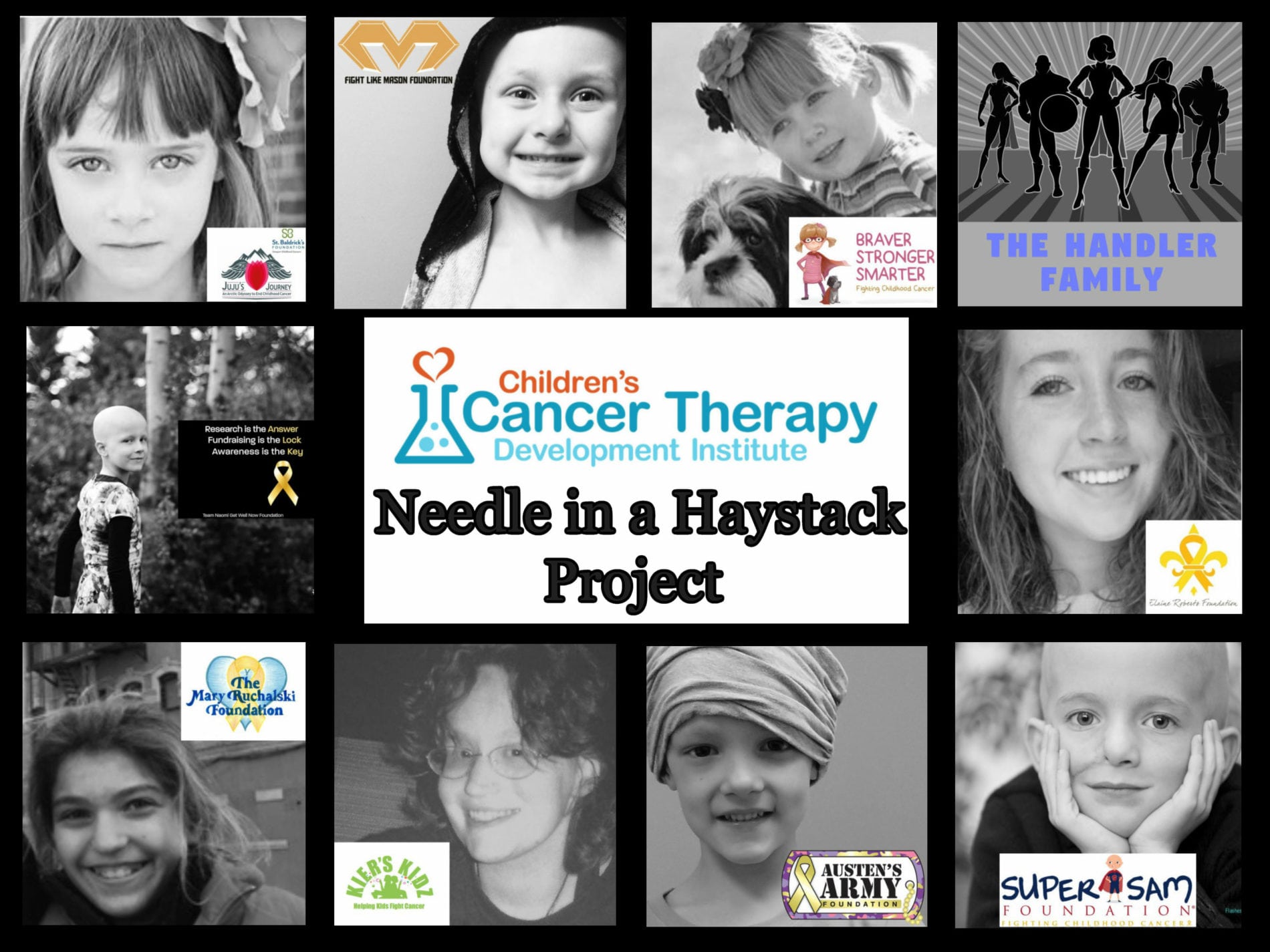 In a groundbreaking collaboration, 10 family groups from around the world have raised $250,000 to fund the preclinical validation of a key drug discovered in a 640,000 drug screen for rhabdomoysarcoma. In the following guest blog post by Eva’s mom and Braver, Stronger, Smarter Inc. co-founder, Sharleigh Stevenson, you will hear more about this exciting project and also about how this unique collaboration has empowered families touched by rhabdo to take action against the disease that has ravaged their loved ones.

Finding the Bridge of Hope, by Sharleigh Stevenson

There would be very few parents who do not recall the moments surrounding the news of their child’s cancer diagnosis. We remember the shadows on the wall, the ticking of the clock, the broken expression on the doctor’s face, the pounding of our heart and the tissues on the table. The doorway of diagnosis is sadly the beginning of what unites us as families within the childhood cancer community. And united we fall into a reality that is colored with a fear that once only flashed in our nightmares.

The opposite of fear is safety. The bridge connecting these disparate places is called hope. It is the bridge of hope that we search for. We desperately yearn to cross a bridge, open the doorway to safety and slam it in the face of fear. But for many childhood cancers that bridge does not exist or is flimsy and dangerous at best. Choices are rare, especially for metastatic and relapsed disease.

Rhabdomyosarcoma, a soft tissue cancer, was my fear, and every bridge I tried to cross with my daughter disintegrated beneath me. My journey is echoed by many.

The portrait of the fight against high risk rhabdomyosarcoma has been covered in dust for decades. Knowledge gained in the lab about this disease has provided numerous insights, but the frustration and fury of the rhabdomyosarcoma family community remains suppressed. Rhabdomyosarcoma remains one of the top five causes of childhood cancer deaths. Treatments for high risk disease remain the same as the ones used forty years ago. Age has not improved them. They remain woefully inadequate. Rhabdomyosarcoma has only ever had about 600 drugs tested against it. A pitiful few. New-generation drugs combined with existing regimens have shown impact on improving outcomes for only a minority. It’s time to see past the dust.

The disparity between what current science and technology can offer and what is available to families is deeply alarming. It is morally wrong for families to suffer when knowledge exists to help them. But everyone in childhood cancer world knows that financial drivers have a louder voice than morals. Small disease groups like rhabdomyosarcoma offer limited to no market for profitability and return on investment. We remain at the bottom of the list of priorities for industry and government. For this to change we must look to include different bridges to safety.

While we expect the scientific and legislative communities to look beyond the miserable status quo for opportunities to improve the lives of our children, as a parent community so must we. Quiet fury is a fabulous fuel, some of the biggest social changes in the world had fury as a driver. Fury is a fabulous fuel though only if it is propelling united constructive action.

An opportunity to do just that came my way a couple of months ago. I asked Dr. Charles Keller what he would do if he had a quarter of a million dollars. A small sum in the bigger scheme of things. Perhaps it was a test. Perhaps it was a crazy moment. His response was to fund the preclinical validation of one of the key compounds of a 640,000 drug screen. This massive screen was nearly 1000 times more comprehensive than anything ever done before for rhabdo. The lead compound was an adult medication approved by the FDA in the 1990’s. A compound often overlooked and never considered for use in childhood muscle cancer.

My first thought was that I was going to find the money to get this opportunity moving. Somehow. Drug discovery is potentially high risk on investment, but also an opportunity for success. I was hooked. Families need more bridges. Better still, bridges that will take them with more certainty to where they want to go.

My second thought was that nobody understands the relentlessness of rhabdo like those who have lived with it. So I went on a quest that took me from near central Australia to South Africa, Europe, Asia, Canada and the United States searching for others who wanted to collaborate on this project. Of the 55 groups I contacted some were no longer in operation, some provided only psychosocial supports, some were fully committed elsewhere, some were simply not interested, and quite frankly some just flipped me the bird. Within 6 weeks though I had found 9 other like-minded family groups who agreed to share the funding and risk commitment for the project.

The two year $240,000 project is supported with funding by 10 family groups from Canada, Australia and the United States. These groups are The Elaine Roberts Foundation, The Super Sam Foundation, Juju’s Journey (in partnership with St Baldrick’s), The Fight Like Mason Foundation, Braver Stronger Smarter Incorporated, Kier’s Kidz, The Mary Ruchalski Foundation, the Handler Family, Austen’s Army Foundation, and Team Naomi Get Well Now. This family collective is at the forefront in pushing for progress in fighting this deadly disease. It is fabulous to see that ccTDI has already hit the ground running to accelerate the project’s technological foundations to find the “Needle in a Haystack”.

I think I could speak for my fellow family collaborators in saying that we want to stop families from having to cross derelict and poorly engineered bridges. We desperately want them to be safe. We believe research is the only answer to reach the door of safety. United we fell into a nightmare, but through being united in areas of research that matter to us, the whole rhabdo family community can help nightmares stay in dreams where they belong.

To address the pressing & unmet clinical need to identify treatments for rhabdomyosarcoma, cc-TDI have generated multiple genetically-engineered mouse (GEM) models of the alveolar and embryonal subtypes of RMS and the undifferentiated pleomorphic sarcoma (UPS) subtype of NRSTS. Development of these GEM models has resulted in both the mechanistic understanding and the therapeutic approaches to RMS. Soft tissue sarcoma models were diligently characterized to be representative of the human diseases by histopathology, gene expression and other features, yet ccTDI’s 3-11 allele Cre/LoxP-mediated conditional models have the special features of knowing the cell-of-origin and mutational profile of a given tumor.

Through cc-TDI’s academic-pharma partnership with a major Swiss pharmaceutical company, 640,000-compounds have been screened across a range of cells-of-origin and mutational profiles for primary tumor cell cultures taken from these murine sarcomas. Four of the most potent hits share near-identical chemical structures. All compounds have cell growth inhibition activity against alveolar RMS (ARMS) and embryonal RMS (ERMS), only mixed activity against UPS, but no activity against normal fibroblasts. One of these compound hits is an FDA-approved cardiovascular medicine with a favorable long-term side effect profile, and completely unstudied with respect to rhabdomyosarcoma.

Our in vitro studies in 3 human rhabdomyosarcoma cell lines also affirm the activity of 4 other drugs in this class of FDA-approved medicines. Through defining the target of these drugs and validating their single-agent activity in vivo for a wide range of ARMS and ERMS models, cc-TDI will pre-clinically validate a compound/class of compounds (and their biomarkers) for RMS that translate quickly to cooperative group clinical trials as an upfront targeted therapy. Given the tolerability of this class of compounds, the potential for use as a maintenance therapy for RMS is also very high.